RAGA IN QUARANTINE: HAS THE HEYDAY OF AFGHAN MUSICAL CULTURE REALLY PAST?

A few days ago I received an innocuous message on Facebook: Ramin Saqizada, Rubab player from Kabul, had uploaded a new video on youtube. In the shadow of the Corona epidemic, this message was virtually unremarked as the worldwide arts lockdown hits artists particularly hard in places where art has already been locked down for decades for political reasons.

Ramin’s video is a 30-minute recording of Raga Maru Bihag, played live in a living room in Kabul, recorded with the camera of a mobile phone that someone patiently points at the two musicians for the entire duration of the performance. Ramin is accompanied on the tabla by Khalid Hamahang. A handful of listeners have settled on the carpet around the two musicians, most of them musicians themselves – such as Ramin’s father Ustad Din Mohammad Saqi or Kabul tabla player Fraidoon Miazada. During the course of the living room concert, adults whisper to a child that sits down in the audience to keep quiet. Every now and then, tongues can be heard clicking in appreciation and murmuring in approval when Ramin brilliantly completes one of his virtuoso improvised phrases.

Only four months ago, in March of 2020, Ramin and his colleagues from the “SAFAR-Ensemble” were sitting in a hotel room in Germany, preparing for a series of long-planned concerts. The Afghan musicians had gone through a lengthy and exhausting visa process, concert halls had been booked and the SAFAR ensemble was ready to go on stage when the lockdown struck- all upcoming concerts were canceled and Ramin had to leave Germany empty-handed.

This is doubly tragic, because the canceled SAFAR-concerts were not just a missed opportunity for Afghan musicians to have their art heard properly on the international music scene. They are also a missed opportunity for performative transformation for all of us. Sadly, instead of the music, the only thing left is the phrases used to convey the “foreign culture” across to us. The following appeared in German press about the SAFAR ensemble:

This is a narrative, that has driven the western perception of the Afghan musical world for a long time. For many years, since the beginning of the reconstruction of the cultural landscape of Afghanistan, we have been told the story of Afghan musicians as a story of „heroes of resistance“ who stood up for the values of culture, freedom, beauty and art in the days of barbarism and religious fundamentalism .

This is not completely wrong, but we should still ask ourselves whether the musicians from Kabul have something to tell beyond oriental enchantment, that would affect us in our own current cultural situation. Indeed the repetitive narrative of lost Afghan music culture raises the following question: Are we only able to listen, when the master musicians are the last of their kind, as if the Kabul musicians were an endangered species? In other words, has the heyday of Afghan music really passed and should it stay there in the past?

„The music of the SAFAR ensemble is a powerful expression of hope, a tool for education and knowledge, for joy and suffering and freedom and provides insights into the music history of Afghanistan.“

But whose „hope, joy, freedom and suffering“ is actually mentioned here? And what insights does Kabul music really have to offer today?
First of all, Afghanistan’s music history constantly reminds us of of a blind spot in our historiography, because the missing music world of Kabul has disappeared altogether along with the innocence of the Western ideology of freedom. The destruction of the Afghan music scene did not begin on the day in autumn 1996 when the Taliban invaded Kabul, smashing instruments and tearing tapes from music lovers‘ tape recorders to burn them on the street. Rather, the destruction of Afghan culture began on the same day when Zbigniew Brezinski, US President Jimmy Carter’s National Security Advisor, handed the first American arms shipment to a group of mujahideen fighters at Khyber Pass in February 1980 with the words:
„That land over there is yours, you will go back to it one day, because your fight will prevail and you will have your homes, your mosques back again, because your cause is right and god is on your side.“
It was the first delivery of many American weapons that followed, many of which later were to hit the historic musician quarter of Kharabat during the siege of Kabul in the early 1990s, long before the Taliban even entered the scene.

So in the name of what freedom does Kabul music speak to us today?
It was only the Corona Lockdown that raised our awareness to the fragility of our own cultural landscape, which is not only threatened by the virus, but also by the virus of rising aggressive nationalism, emerging social inequality and the ideological division of our societies. The musicians from Kabul can sing a song about it, which we should not applaud hastily and cheaply – the cheers could get stuck in our throats. There is no more „here“ of the free world and no more „there“ of a past cultural bloom in the Orient. This is a colonial fairy tale. The land of freedom is neither here nor there in a glorious past. The musicians from Kabul are not the last representatives of a past bloom, they are in the here and now of a conflicting world society.

Today, in the times of the virus lockdown and in view of a cultural lockdown on a much larger scale, in which the contradictions of western capitalism are emerging like never before, musicians from Kabul remind us of the values and conflicts that we reproduce everywhere in the heart of our societies.

If you follow Ramin’s digital publications frequently, you will find that he is pursuing a path of continuous artistic development. He purposefully expands his instrumental repertoire to include ragas that are rarely or not at all heard in the cosmos of Afghan classical music. He thus reactivates the threads of a strong connection between the musical worlds of India and Afghanistan that are part of Afghanistan’s musical modernity. When Ramin masters a composition in Raga Maru Bihag on his Rubab, he prompts us to listen closely, because he is not just delivering another example of his virtuoso mastery of the instrument. He is rather breaking new musical ground on a well-known floor of tradition, in which the fruitful exchange of the Cultures is essential. For Raga Maru Bihag it doesn’t matter whose culture it belongs to, the only limit that plays a role for the Raga is the subtly used jump between the natural and excessive fourth on the diatonic scale.

Finally, Ramin’s video brings closer one last aspect of our faltering cultural certainties. We see the practice of an artform that takes place far away from the big stages, in the living rooms of connaisseurs, for a handful of music lovers who can identify and appreciate the subtle colors of the raga.In view of the fact that today such handpicked audiences can only be found scattered around the world, musicians from Afghanistan entered the digital public long before the features of digital performances were appropriated by musicians everywhere during the corona lockdown. Music from Afghanistan has long since become music of the digital sphere of the present day. It is therefore always worth listening when Ramin Saqizada releases a new raga there. 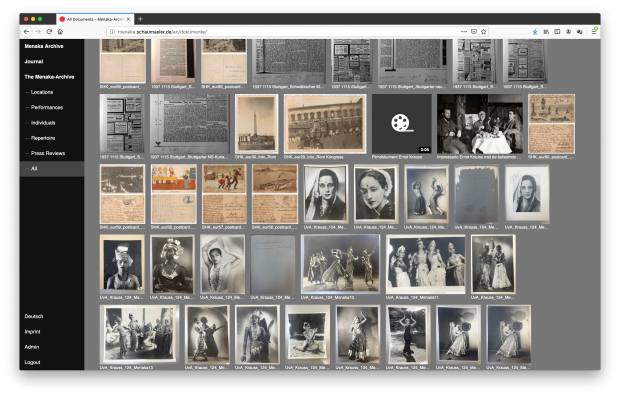 Sarod-maestro Irfan Khan is the representative of a musical dynasty in India – the Lucknow-Shahjahanpur-Gharana. Irfans anchestors shaped classical Indian music. Among them was Sakhawat Hussein Khan, Irfans grandfather, who was one of the first Indian musicians to perform on European stages in the 1930s.
Filmmaker Markus Schlaffke follows Irfan Khan beginning in 2014, when Irfan returns to India after having taught music abroad for several years, to resume his concert career and to arrange the family affairs. From there on, the film documents Irfans efforts to take care about his musical heritage, which he is afraid could be falling into oblivion soon. Without institutional support, Irfans preservational undertaking becomes at times a frustrating business – or as Irfan puts it: “It feels like an albatross around the neck!”.
The film tells the story of some of the most influential Indian musicians. It turns out to become a journey through a landscape of memories that begins in Lucknow’s palaces and leads to German archives.